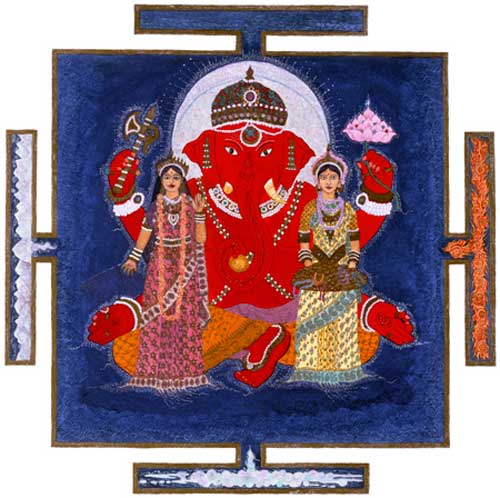 Ganesh With Consorts Riddhi And Siddhi

Ganesha is the Lord of Obstacles, capable of creating or removing them. People pray to Ganesha at the beginning of all undertakings and journeys to remove all potential obstacles. He is depicted here in a meditative posture. In his trunk he is holding a modaka, his favorite sweet. Ganesha is the presiding deity over the water element, whose finest essence is soma, “the glue of the universe.” Soma is symbolized by moonlight on water, so Lord Ganesha is depicted in a cosmic ocean, with a full moon shining behind him. A crescent moon, emblem of Lord Shiva, is outlined in recognition of Ganesha’s father. Ganesha is a protector, because he stood guard at the door while his mother, Parvati, was bathing. An image of Ganesha is often placed near the front door of a house. Ganesha is the god of writers, because he broke off one of his tusks to use as a stylus and transcribed the Mahabharata, which was dictated to him by Vyasa. The four branches of the yantra contain the other four elements: air, fire, akasha or space, and earth, depicted as the Himalayas with Mount Kailasa, Lord Shiva’s abode, in the middle. Ganesha’s wives, Riddhi and Siddhi, embody prosperity and fulfillment of desires. All three figures face forward to bless the viewer.