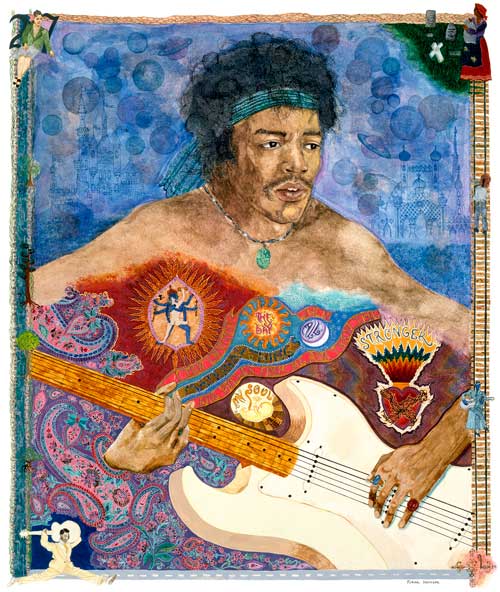 I can envision the day when all material things are pulled from me, and then the stronger my soul will be. —Jimi Hendrix

In this psychological portrait of Jimi, I wanted to show him, not as the extroverted wild man that he is usually portrayed, but as the introspective, haunted, deeply spiritual person steeped in the blues tradition that his magnificent lyrics and music convey to me.The abundance of purple in the painting is of course from “Purple Haze.” Jimi’s hair is styled in the way he wore it when he performed at the Monterey Pop Festival, where I first saw him. He is playing the white Fender Stratocaster with which he is often associated. He was left-handed and played it backwards and upside down, as shown.Surrounding Jimi’s head are images from the song “Castles Made of Sand.” The line is: “And so castles made of sand fall in the sea, eventually.” Like the quote, they emphasize Jimi’s feeling about the impermanence of life and its material trappings. Above is a planet-filled sky because he was fascinated by science fiction and astrology. His songs are filled with imagery of other worlds. He also felt at times that he came from another planet.Above Jimi’s hands are western and eastern spiritual power symbols to emphasize the genius that poured forth from his hands when he played guitar. Over his left is a riff on the Sacred Heart, only it is surrounded by barbed wire instead of a crown of thorns because Jimi’s heart was so battered and guarded. A Tantric god and goddess in yab-yum position preside over his right hand, symbolizing the sexual power of his music. The quote lies between the two symbols, with his soul symbolized by an embryo inside an egg/womb. There is an underwater castle from the line, “We’ll hold hands and then we’ll watch the sunrise from the bottom of the sea,” in the song, “Are You Experienced?”The borders represent the blues tradition from which Hendrix drew: At the left is a river symbolizing the flow of blues from generation to generation, musician to musician. The two-lane highway at the bottom, the train tracks on the right and the top border of a dirt road of Southern red earth all show the paths on which blues musicians traveled. An anonymous bluesman walks the railroad tracks. Jimi’s left arm emerges from a portrait of the great Robert Johnson, taken from one of two known photographs of him.

The corners:
• Upper left is Jimi’s mother sitting inside the number twenty-seven, the age at which they both died. She is calling to him to join her. Jimi grew up mostly apart from her, missed her terribly, and mourned for her after her death for the rest of his life.
• Upper right is from Jimi’s song “Voodoo Chile,” a black New Orleans voodoo priestess carrying her baby in a cemetery, where some voodoo rituals are performed. Voodoo emerged from the West African Yoruba religion of the slaves combined with the Christian religion they were forced to adopt.
• Lower left is the great musician T-Bone Walker. Many think that Jimi invented playing guitar behind his head and back, between his legs, with his teeth, etc. However, Jimi was drawing from a blues tradition of earlier musicians such as Charley Patton and T-Bone Walker, who performed such acrobatics.
• Lower right is the sign of Legba, the Yoruba god of the crossroads. Yoruba was the original religion of the West African slaves. Crossroads are an archetypal symbol in blues, and there is speculation that they originally came from the tradition of Legba.